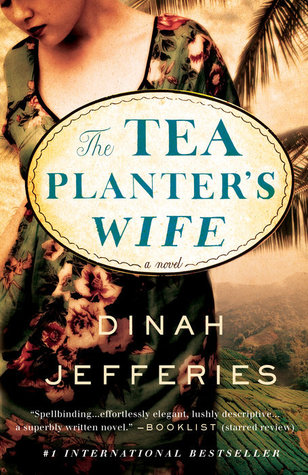 Publisher and Publication Date: Broadway Books. Paperback June 20, 2017.
Genre: Fiction, India.
Pages: 448.
Source: I received this paperback copy from Blogging from Books for this review. I was not required to leave a positive review.
Rating: Okay.

Summary:
Gwendolyn Hooper, age 19, traveled from her home in Gloucestershire, England to the country of Ceylon. The year is 1925. She joined her new husband, Laurence Hooper. Laurence is a widower and a tea planter. He is age 37. They met in England and had a whirlwind relationship. Gwen is dreamy-eyed with love and the expectation of a being a wife.  On board the ship, just as Gwen arrived in Ceylon, she met mysterious Savi Ravasinghe. After attending a party, Gwen became uncomfortable with an American woman who is in a business relationship with Laurence. Early in the story unanswered questions develop for Gwen. What happened to Laurence’s first wife? Why is his behavior so odd for a newlywed? Is the American woman more to Laurence than a business type relationship?
Ceylon was a British Crown colony between 1802 and 1948. Ceylon is now called Sri Lanka. It is an island southeast of India. The length of the island is 268 miles. The width of the island is 136 miles. Colombo is the capital of Sri Lanka. Three mountains on the island are over 7,500 feet, the tallest at 8,281 feet. The Monsoon rains are from May to September. For more information: Britannica.

My Thoughts:
The Tea Planter’s Wife had the beginnings of a great novel, but there are four things that did not work for me.
1. There were opportunities to examine and illustrate through the story the contrast of wealthy citizens (white British), and the poor people who were native to Ceylon and India. Many of the workers at the tea plantation were from India. I wanted to see more development in this element. The Great Depression effected all people. The wealthy lost money and the poor became poorer. Gwen loved beautiful clothing. She was alert to fashion trends. However, most of the people living in Ceylon were trying to feed their families. During the story Gwen wanted to do more for the people, for example build a school. Her husband is less inclined to want to reach out and help the people. So, some attention is given to this element, but I wanted to see greater development.
2. Several descriptive references are made to “pulled faces.” What does this mean?
Further, several monotonous references are made to a trembling or “wobbled” mouth. These descriptions were used too much. They were boring.
3. Gwen is a teenager when she marries a man 18 years older. She is young, naïve, silly, and immature. It took gumption to marry and travel so far away from England to the exotic world of Ceylon. What happened to that gumption she had shown a spark of? I wondered what kind upbringing and home life she’d had? I wondered about her parents? During the story, Gwen reflected on her father. And, she misses home at times. Her parents never went to visit their daughter while she was living in Ceylon. A friend from England visited her but not her parents. It became a big mystery to me about her parents. I couldn’t understand why more attention was not given to them? I don’t think Gwen even mentions letters from her parents. Odd.
4. The answer maybe because Gwen is so young, but why did she not know what happened to the first wife? Females are curious. Young females are known to ask questions about previous relationships their men had. Why did she not pick his brain beforehand?
5. There is an absence of communication between Laurence and Gwen. If in the beginning they had shared about their families, then there would be no need for insecurities. Of course, there would be no story either.

After reading The Tea Planter’s Wife, I wondered if the story had been told by the nanny/servant Naveena, would I have liked it better? This woman had cared for Laurence, his first wife, and Gwen. Naveena was a native to the culture and people group. I feel she had a unique perspective on the people she worked and cared for.

Final Thought:
The story wraps up nicely. Everything is placed in a nice gift wrapped box with a bow by the end of the novel. I am glad the story had closure. I kept reading, The Tea Planter’s Wife, because I wanted to know what happened to the characters and those unanswered questions about the first wife.