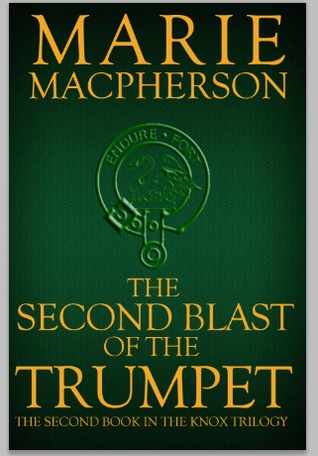 About the author:
Hailing from the historic honest Town of Musselburgh, six miles from Edinburgh, the capital of Scotland, Marie Macpherson (née Gilroy) developed a love for literature and languages from an early age. Brought up on the site of the Battle of Pinkie and within sight of Fa’side Castle, she was haunted by tales and legends from the past. Though she has travelled widely, teaching languages and literature across Europe from Madrid to Moscow, she has never lost her passion for the rich history and culture of her native Scotland.​
For more information please visit Marie’s website. You can also connect with her on Facebook, Goodreads, and Twitter.

Summary:
“The Second Blast of the Trumpet” is the second book in the life of John Knox. John Knox was a zealous crusader for Reformation in Scotland. The time period is mid 1500s.
“The Second Blast of the Trumpet” is not a religious book. It is not spiritual in nature. It is not pro Protestant. It is a historical fiction piece about the man himself, John Knox.

My Thoughts:
•My favorite aspect of this story is I have a better understanding of Knox’s character. He had the gift of speech. He had a way of explaining the Bible in simple language for the common folk. He was a natural orator. He was passionate, strong-willed, pious, bold, dynamic, and vibrant. I also saw his weaknesses. I feel Knox has been portrayed as dimensional and real.
•I enjoyed reading about the complexity of the Bowes family. The relationship between Marjory Bowes and her mother was close. Marjory became the wife of Knox. One of my favorite lines from the book is, “Better to be an old man’s darling than a young man’s slave.”
•The committed love and passion between Knox and Marjory remained steadfast through the story. I loved their chemistry.
•Knox holds his own and has interesting conversations with people who do not share his views.
•”The Second Blast of the Trumpet” showed me the sights, sounds, and smells of this era. It is a descriptive story.
•The historical facts and people of this time were brought to life: King Edward of England, Lady Jane Grey, Mary Tudor, Bishop Gardner, John Calvin, and Mary of Guise.

2 thoughts on “(Review) The Second Blast of the Trumpet, Book Two in the Knox Trilogy by Marie Macpherson”