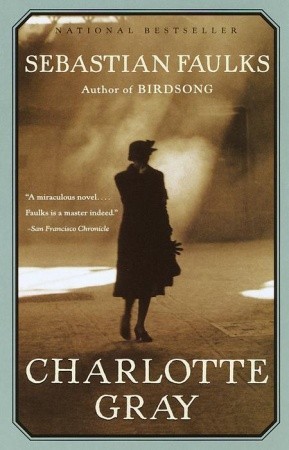 Have you seen the film Birdsong? It’s available on PBS Masterpiece subscription through Prime Video. The same author wrote Charlotte Gray and Birdsong.

Summary:
Charlotte Gray is a young Scottish woman who moves to London during the early years of World War II. She rents a room from a young woman named Daisy. The first night in her new lodging, Daisy invites her to a literary party. At the party, she meets Peter Gregory, an RAF pilot. One evening together and it’s an instant connection. Peter goes on a mission to France and does not return to England. Charlotte makes a bold move by joining and training with G-Section as a courier. Her goal is to find and bring Peter home.

My Thoughts:
•Charlotte is not a dimensional character. She is stoic. I pictured her throughout the book with a straight face. She has events that bring her to the point of showing emotion, but continues to emit a quiet strength. I know little about her life before coming to London. Her father was in World War I and has a difficult time adjusting to life post war. There is a painful memory of this period that is spoken about in brief later in the book. I felt this last aspect was thrown in as a glimpse of a dark childhood. This event is not explored in depth. It is a few crumbs thrown in the story that is a bit of a surprise to me. Charlotte comes across as a straight forward, conservative type gal. Later in the story and while in France, she takes a dip that I didn’t expect. I wondered if the author was exploring a bit with Charlotte’s character by adding these two events? By using these two elements in Charlotte’s character, she became more human and imperfect.
•Peter Gregory is a man’s man. He is not interested in serious relationships. His focus is flying and the war effort. Meeting Charlotte and the relationship that “just” happens, takes him by surprise. Love at first site or there afterwards is not something I believe in personally. Lust yes. Love no. Love take time to grow and deepen. However, Charlotte Gray is a fictional story.
•I’ve read several stories that are about the Resistance and SOE work. Charlotte’s duties are not complex. And her work is limited. The focus of this story is less on the work and more about the relationship with Peter Gregory.