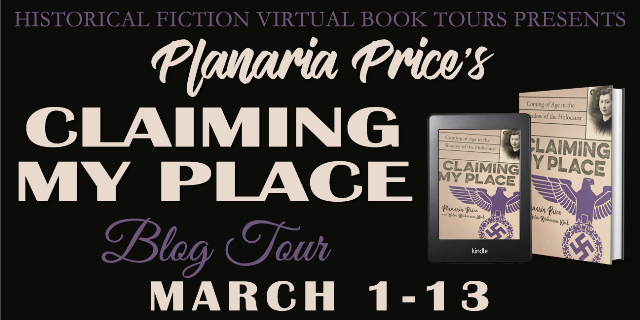 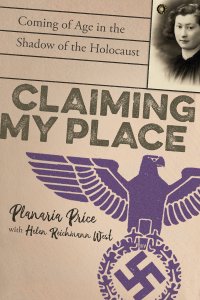 About the author:
After graduating from Berkeley and earning a Master’s Degree in English Literature from UCLA, Planaria Price began her career teaching English to adult immigrants in Los Angeles. She has written several textbooks for University of Michigan Press and has lectured at over 75 conferences. In addition to her passion for teaching and writing, Planaria has worked with her husband to save and restore over 30 Victorian and Craftsman homes in her historic Los Angeles neighborhood. Claiming My Place is her first book for young adults.
Website for Planaria Price 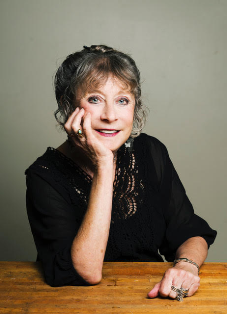 Praise:
“Price has boldly elected to tell the story in Basia’s own first-person, present-tense voice. The result is a dramatic, suspenseful account of survival in extremis, told in collaboration with Basia’s American daughter.” ―Booklist
“Price’s rendering of West’s mother’s early life reads like suspenseful historical fiction, telling a rarely heard side of the Jewish experience during WWII . . . Family, friendships, and romance give poignancy to this unique coming-of-age story, which is further enhanced by maps, a glossary, and an afterword.” ―Publishers Weekly
“A rich exploration of a Holocaust survivor’s sheltered childhood, the atrocity that failed to destroy her, and her later life as an immigrant.” ―Kirkus Reviews
“I was completely engrossed by this drama of survival. Barbara Reichmann’s story is quite extraordinary. It is sad, and terrible, and yet somehow captivating. The whole story of those who survived the Shoah by passing as Christians and working in Nazi Germany is an often forgotten part of the historical record.” ―Kai Bird, Executive Director, Leon Levy Center for Biography at CUNY Graduate Center, and co-author of the Pulitzer Prize–winning American Prometheus: The Triumph and Tragedy of J. Robert Oppenheimer
“As occurs with The Diary of Anne Frank, this book merges the dire circumstances of the Holocaust with the tenuousness of being a teenager. But Claiming My Place expands the view provided in the diary for one critical reason. Anne Frank’s story is told within an isolated cocoon. In Barbara’s story, however, the Holocaust is in full view as her experiences unfold.” ―David H. Lindquist, Ph.D., IPFW College of Education and Public Policy / Regional Museum Educator, United States Holocaust Memorial Museum
“This frightening true story of a young Jewish girl’s flight from the deadly grip of the Nazis celebrates the surprising ingenuity and raw courage found only in the depths of the human spirit. Risking what few others dared, Barbara Reichmann, née Gucia Gomolinska, speaks with wisdom and uncommon self-awareness through her detailed, colorful, and evocative recollections from earliest childhood. In the final portion of this book, her daughter, Helen West, continues Barbara’s journey in an insightful and loving overview of Barbara’s life from the family’s arrival in New Orleans in 1951 until her death in 2007. This is a great read with the suspenseful, inspiring and uplifting appeal of a novel, about a character who will capture the reader’s heart.” ―Allan Holzman, Peabody and Emmy Award-winning director and editor (Steven Spielberg’s Survivors of the Holocaust, Old Man River, The Native Americans)
“Thanks to the detailed memories and the conversational tone, this book provides an engaging and informative reading experience with as much appeal as a fiction title. Recommended for most YA nonfiction collections.” ―Magdalena Teske, West Chicago Public Library District School Library Journal
“This book was truly a celebration of the human spirit. What a gift she has for putting you in the story. Her way with words, plus her weaving of the actual events recounted to her by the unbelievably courageous Basia and her daughter Helen, was nothing short of magical. The included photographs and epilogue served to fully round out this amazing tale. I never wanted this book to end!” ―Rabbi Lynn Brody Slome

Summary:
Claiming My Place is the true story of a young Jewish woman who survived the Holocaust by escaping to Nazi Germany and hiding in plain sight.
Meet Gucia Gomolinska: smart, determined, independent, and steadfast in the face of injustice. A Jew growing up in predominantly Catholic Poland during the 1920s and ’30s, Gucia studies hard, makes friends, falls in love, and dreams of a bright future. Her world is turned upside down when Nazis invade Poland and establish the first Jewish ghetto of World War II in her town of Piotrkow Trybunalski. As the war escalates, Gucia and her family, friends, and neighbors suffer starvation, disease, and worse. She knows her blond hair and fair skin give her an advantage, and eventually she faces a harrowing choice: risk either the uncertain horrors of deportation to a concentration camp, or certain death if she is caught resisting. She decides to hide her identity as a Jew and adopts the gentile name Danuta Barbara Tanska. Barbara, nicknamed Basia, leaves behind everything and everyone she has ever known in order to claim a new life for herself.
Writing in the first person, author Planaria Price brings the immediacy of Barbara’s voice to this true account of a young woman whose unlikely survival hinges upon the same determination and defiant spirit already evident in the six-year-old girl we meet as this story begins. The final portion of this narrative, written by Barbara’s daughter, Helen Reichmann West, completes Barbara’s journey from her immigration to America until her natural, timely death.
The book includes three maps and 41 photographs in black and white.

My Thoughts:
Several reasons led me to award this book an excellent rating:
•A detailed account of Barbara Reichmann, from age 6 until post World War II. The book encompasses her home life, parents, siblings, neighborhood, hometown, schools, and university life. In addition, her plight of survival during the war. And, post World War II life: displacement.
•A strong teaching on the Jewish traditions, religion, holidays, and festivals. I enjoyed reading about the foods eaten during Passover, as well as the reasons behind the types of food eaten. During Passover, they sing songs and read from the Haggadah.
•Another point related to the previous. At the Seder meal, an empty chair is left for Elijah, even a cup of wine is left for him. I’d not heard of this custom before, and I loved hearing about the details of several other Jewish customs.
•Through Barbara’s voice, I became swept up in her story. I’ve read a long list of Holocaust stories. Barbara’s story is unique. The story of her survival is the expected reading, but I did not expect to learn about her life as a Jew. I feel this is an excellent teaching tool for students to learn about both the Holocaust and the Jewish religion.
•Barbara gave me a background on anti-Semitism in Europe. What the Jews had been accused of throughout the centuries. And, she gave an interesting perspective by stating it is what they’d come to expect. “Jews have learned to accept and endure the persecution off an on.”
•On September 1, 1939, Nazi Germany invaded Poland. This begins a thirteen day account of Barbara’s memories of this history. It gave me an overall picture of those first days.
•A horrifying life after Nazi Germany invaded Poland. The new laws, abuse, starvation, and murder. In one scene, Barbara and her family are eating dinner when they hear German voices outside their door shouting, “Schnell! Schnell!” The men come in their home going through the house and stealing, while the family still sits at their dinner table not wanting to take a breath.

Claiming My Place is described as a young adult book. Through most of the story, Barbara is in her twenties. The book is not descriptive about the death camps. I wanted to mention this last statement for a parent who may be thinking of this book for their child. I plan to pass this book along to my teenage granddaughter. However, she too has read extensively Holocaust stories.