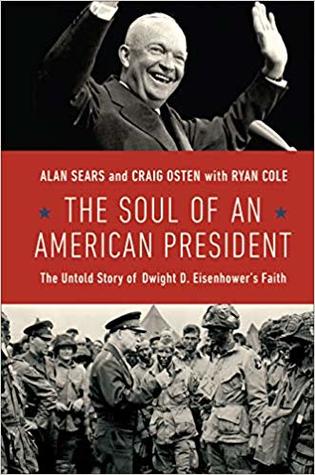 Publisher and Publication Date: Baker Books. June 4, 2019.
Genre: Christian nonfiction. Spiritual biography.
Pages: 240.
Source: I received a complimentary copy from Baker Books, but was not required to leave a positive review.
Rating: Excellent.
Audience: Reader’s of World War II history. The intention of the book is to focus on Eisenhower’s Christian faith. Readers will need to note this emphasis.

Other biographies on Eisenhower are 600 to 900 plus pages. The Soul Of An American President is a tight 240 pages.
The focus of the book is to look for and define Dwight D. Eisenhower’s Christian faith.
A second reason is did his faith develop when he became president of the United States of America?
When I began reading the book I chose to have a “convince me” attitude. I had read nonfiction books and articles about his life. I heard stories my dad had told me. I’d read a book about the relationship between Eisenhower and his secretary during the war, Kay Summersby. I wanted this book, The Soul Of An American President, to convince me he had a Christian faith.

What this book showed me:
•The ancestry of the Eisenhower family. Where they originated in Europe, and their Anabaptist heritage. They settled first in Pennsylvania.
•Eisenhower’s parents and siblings. This includes his parents religious and pacifist beliefs. His mother’s affiliations would be remarked on and cause trouble later.
•Ike’s ambition to attend college.
•His appointment to West Point.
•A long series of military commissions that seemed to be unremarkable. His transfers to military schools and further training.
•Marriage and family. The book touches on the strained times in his marriage.
•The friendship of Eisenhower and Patton.
•World War II. His role as the commanding general for the Allied Forces in Europe. One chapter is devoted to this role.
•His elections and presidency. During his presidency, the Civil Rights movement, Cold War, Communism; and the things while in office he took part in creating.
•The relationship he had with Billy Graham, Richard Nixon, and pastor Dr. Ed Elson.
•Life after he left office.
•His failing health, death, and funeral.

What I loved about the book:
•Eisenhower’s faithfulness to his military commissions despite his disappointment or difficulty with them.
•I saw how God used the experiences in life to prepare him for future experiences. God was uniquely preparing him.
•The strong relationship between Billy Graham and Eisenhower. The last meeting they had before Eisenhower’s death is described by Graham. This is a special conversation.
•Nixon’s poignant eulogy.
•The Scripture that was read and the hymns that were sung at Eisenhower’s funeral.
•Letters and speeches are included from statesman, friends, family, and Eisenhower himself.
•An interesting interview by Clare Booth Luce.
•I saw a little of the private side of Eisenhower in his marriage.

Did the trio of authors convince me of Eisenhower’s Christian faith?
Yes, I am convinced. I believe what convinced me the most was his transformation. Throughout most of his life he’d been focused on military and family. He did not talk about private matters, and his religion and faith was a private matter. However, it was during the war years he mentioned a prayer he’d heard. His story appeared in a military prayer book. And, in the speech he gave a commissioning speech to Allied Forces before D-Day, 6th of June, 1944. In this speech he stated, “And let us all beseech the blessing of Almighty God upon this great and noble undertaking.” Page 100. As time went on, Eisenhower remarked more often of God and praying. It is interesting to note, it was important to him that his faith not be used as a political show or insincere. He was a man of strong principle and conviction. The Soul Of An American President includes in its final chapters more examples of his faith.
In the final pages, I became teary eyed. Eisenhower is a hero in my eyes. I already admired him because of his military strategy, rank, and person. I admire him even more knowing he was a man of principle in his faith. He was a person of strong character who was not persuaded to do anything that he did not fully believe in.

One thought on “(Review) The Soul Of An American President: The Untold Story of Dwight D. Eisenhower’s Faith by Alan Sears and Craig Osten with Ryan Cole”