A graduate of Indiana University School of Law and Columbia University Graduate School of Journalism, Glen Craney practiced trial law before joining the Washington, D.C. press corps to write about national politics and the Iran-contra trial for Congressional Quarterly magazine. In 1996, the Academy of Motion Pictures, Arts and Sciences awarded him the Nicholl Fellowship prize for best new screenwriting. His debut historical novel, The Fire and the Light, was named Best New Fiction by the National Indie Excellence Awards. He is a three-time Finalist/Honorable Mention winner of Foreword Magazine’s Book-of-the-Year and a Chaucer Award winner for Historical Fiction. His books have taken readers to Occitania during the Albigensian Crusade, the Scotland of Robert Bruce, Portugal during the Age of Discovery, the trenches of France during World War I, the battlefields of the Civil War, and the American Hoovervilles of the Great Depression. He lives in Malibu, California.
Learn more about Glen’s books and subscribe to his newsletter for deals and new releases at www.glencraney.com.

Georgia burns.
Sherman’s Yankees are closing in.
Will the women of LaGrange run or fight?

Based on the true story of the celebrated Nancy Hart Rifles, The Cotillion Brigade is a sweeping epic of the Civil War’s ravages on family and love, the resilient bonds of sisterhood amid devastation, and the miracle of reconciliation between bitter enemies.

“Gone With The Wind meets A League Of Their Own.”

1856. Sixteen-year-old Nannie Colquitt Hill makes her debut in the antebellum society of the Chattahoochee River plantations. A thousand miles to the north, a Wisconsin farm boy, Hugh LaGrange, joins an Abolitionist crusade to ban slavery in Bleeding Kansas.

Five years later, secession and total war against the homefronts of Dixie hurl them toward a confrontation unrivaled in American history.

Nannie defies the traditions of Southern gentility by forming a women’s militia and drilling it four long years to prepare for battle. With their men dead, wounded, or retreating with the Confederate armies, only Captain Nannie and her Fighting Nancies stand between their beloved homes and the Yankee torches.

Hardened into a slashing Union cavalry colonel, Hugh duels Rebel generals Joseph Wheeler and Nathan Bedford Forrest across Tennessee and Alabama. As the war churns to a bloody climax, he is ordered to drive a burning stake deep into the heart of the Confederacy.

Yet one Georgia town—which by mocking coincidence bears Hugh’s last name—stands defiant in his path.

Read the remarkable story of the Southern women who formed America’s most famous female militia and the Union officer whose life they changed forever.

Several reasons why I love The Cotillion Brigade:
1. It is a history I’ve not heard of before.
2. It is not dual time periods. Bravo! The story is told in a linear or chronological form.
3. There is tension, internal and external conflicts, controversy, and extra-ordinary characters.
4. One of my favorite points about this story is the wonderful dialogue. I love the Southern phrases. I love the specific word usage by the different characters down to their humor and sarcasm. Several times I laughed out loud at the comic moments. The Cotillion Brigade is a serious story of war. In a serious story it is important to have moments when the reader can take a breath. Those comic moments are a benefit.
5. Through Nancy’s eyes I saw the destruction and devastation of the war on the people, the towns, and the land. It is especially moving during the part of the story where she tends the wounds of soldiers.
6. The story moves between the women involved in the Brigade and Colonel Hugh LaGrange. His parts in the story are mainly the events of the war. He is a Colonel in the Union Army. I am able to understand his experiences during the war. His decisions and feelings about the South.
7. The descriptions of the people, land, buildings, homes, and the aftermath of war is brought to life on page. I especially love reading about less significant things like the characters facial expressions and mannerisms.
8. The Cotillion Brigade has a solid ending. A satisfying ending. The devastation of the war on the land and people is a fact. I like characters to have a resolve of some kind. I like to see a transformation. I am pleased with the ending.
9. I can think of one point that is not something I cared about in the story. The beginning of the story is focused on the pre-Civil War years of Nancy Colquitt Hill and Hugh LaGrange. I do not care about house parties and clothing. I do not care about who has a bonnet set on a particular man. I did enjoy reading about LaGrange. These years gave me an idea of his beliefs and convictions.
10. The Cotillion Brigade is not a story with the aim/focus of telling about the injustices of slavery. The emphasis is on the Brigade, Nancy, and Hugh. The characters have opinions and during the telling of the story it is obvious their feelings. 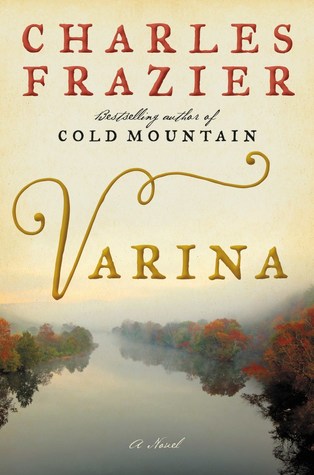 Summary:
Varina is known as “V” in the book. She was the wife of Jefferson “Jeff” Davis, the president of the Confederacy during the Civil War.
The time period for the book begins in 1906 and reflects back. She shares her childhood, courting and marriage to Jeff, raising children, the war years, escape, the years they lived apart, and other memories of life.
The narrator of the story is the author, Charles Frazier. However, a man named James Blake seeks her out and interviews her, for the benefit of how his story came to be. Some of the story is V telling Mr. Blake her life story.
In the opening pages V has to work to remember. It is apparent she is bitter, cynical, and doesn’t want to remember the Civil War period.

My Thoughts:
Usually when I begin reading a book if it doesn’t catch my attention and hold it in the first 100 pages I stop. I persevered in this book. It was the last quarter of the book that I loved. The best line is on page 341. And, one of my favorite parts of the book is her brief visit with Oscar Wilde, pages 333-338.
The last quarter of the book is when V loosens the veil of transparency over her heart. She is older, has time to reflect, and the people who were dear to her are dying. At this point in life, V’s memories, and with the wisdom that comes from age, makes her an interesting character.

I found a few lessons in the book:
•Judgements made of people because of what we think we know about them. Whether it is the color of their skin, socio-economic status, education, political stance, or wealth; we think we know the person and either hate them or love them based on what we know.
•People, and some more than others, are much more complicated and diverse than first thought. And since we cannot read someone’s mind (fears, insecurities, sorrows, and motives) we should be very slow to judge.
•In the span of time, the thoughts, feelings, and words about people often develop differently, and even become a distant memory.