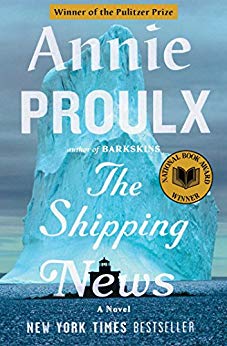 For more information about the author: Goodreads-Annie Proulx.

Summary:
Quoyle is in a loveless and depressing marriage to a woman named Petal. They have two daughters, Sunshine and Bunny. They live in New York. Petal dies in a car accident.  Quoyle, his daughters, and an aunt create a new life in the old home of their ancestors, in Newfoundland.

What I like:
♦Quoyle is an unusual main character. He is not handsome. He has a memorable face, because of his large chin. A chin he is self-conscious of and covers with his hand. He is a character who is an unlikely hero. He is a character who has an absence of social skills. With the exception of his chin, he is a person who would be overlooked in a crowd of people. However, I love the character Quoyle, because he is not the normal type book character. For me, Quoyle is a breath of fresh air in a stagnant pool of same type cliché characters. He is real. He is vulnerable. And, I love it that Quoyle is gentle and kind. In The Shipping News, Quoyle discovers what he is made of, he is stronger than he believes, and this makes his character develop.
♦Petal is the opposite of Quoyle. She is the nemesis. She is savage with cruelty. They are total opposites and make for an odd pairing. However, Petal’s ugly character makes Quoyle’s likable character shine.
♦Proulx uses sharp contrasts in the story. One generation is polar opposite of the next generation. A father who is abusive has a son who is warm, gentle, and kind. Daughters named Sunshine and Bunny. These are joyful, sweet, cuddly girls, but they are living in a gray, sad environment.
♦Proulx’s writing style is often short, crisp sentences with strong verbs. Recently, I read a book with ultra long sentences!
♦The setting for most of the book is Newfoundland. Through the story I came to know the land and people.

What I didn’t like or questioned in The Shipping News:
♦The story is gray. It is a sad story with other sad stories behind the main one. And behind the main story, there are stories that don’t develop. For example, I want to know more of aunt Agnes’s story. She has a story behind that strong penetrating gaze.
♦I noticed the word “milk” being used often in the book to describe the environment. What does this mean? There is a reason Proulx uses this word so many times. The only thing I can think of is “milk” is the first sustenance in life. It is the only thing a baby eats at first. Is it possible Newfoundland is the “milk” Quoyle needs?